A Week of Whisky: Master of Malt – Drinks by the Dram 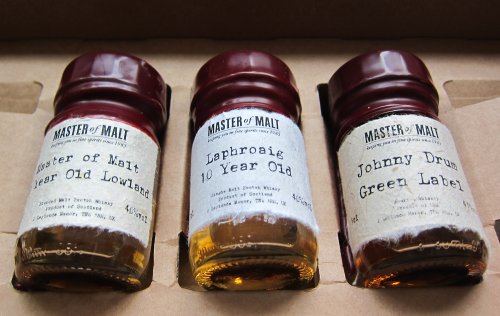 As I noted a couple of posts back, I’m far from being an expert on whisky, and a lot of that has to do with the limited exposure I’ve had to it.

Sure, I’ve been lucky enough in the past couple of years to attend a fair number of media tastings, and the samples that arrive at my door from time to time are appreciated as well. But even with all of that, I know that I’ve barely scratched the surface of what’s out there in the wide world of whisky (and whiskey, and bourbon, etc.), and quite frankly, the main thing holding me back from becoming a serious whisky nerd is the cost. I’d love to have a cabinet stocked with all my favourite spirits from Scotland and Ireland and the Southern US and beyond – but until I win the lottery or find some other path to wealth, it just ain’t gonna happen.

The folks at Master of Malt, a whisky and spirits mail order service the UK, know that there are a lot of people like me out there. And while they can’t go so far as to start sending us free bottles of anything we want – because as nice as that would be, it’s really not much of a business model – they’ve done the next best thing with an initiative called Drinks by the Dram, in which they’re offering a selection of items from their inventory of 3000+ whiskies and spirits in 30 mL samples that start at £1.95 per cute l’il bottle.

Master of Malt was kind enough to send me a trio of drams to taste, and here’s what I thought of them:

Master of Malt 12 Year Old Lowland
Part of the Secret Bottlings Series, in which whiskies from various distilleries are specially selected and house-branded, the Master of Malt 12 Year Old Lowland is described in the tasting notes as “an excellent introduction into the world of malt whisky,” and I’d agree with that assessment. The mild aroma has notes of grass and heather and a touch of honey sweetness. The flavour starts sweet as well, with malt and light honey, before drying in the middle, and finishing with a hint of bitter greens. Nothing to think about seriously, but a nice apéritif.

Johnny Drum Green Label
I’ve long been discouraged by the dearth of decent bourbons available at the LCBO, so I was glad to see this one from Kentucky Bourbon Distillers included in the package. Much like the whisky above, this strikes me as a decent intro bourbon, with a simple aroma of vanilla and buttery wood, and a mellow flavour of vanilla, caramel, and a bit of citrus peel. It’s a bit unrefined – I expect the older Black Label and Private Stock bottlings have the more rounded character that makes for a really good sippin’ whiskey – but it’s still a nice enough bourbon.

Laphroaig 10 year Old
Just as I’m a sucker for über-hoppy beers, so too do I love peaty-as-hell whiskies, and good ol’ Laphroaig certainly falls into that category. Known to be one of the most peat-forward and distinct of all the single malts, it has an unforgettable aroma of seaweed and iodine and magic marker with some malty sweetness doing it’s best to come through, and almost making it. Flavours of salt and peat and seaweed and smoke mingle and merge, and then there’s some sweetness poking through again, with suggestions of vanilla and toasted wood. Remarkable stuff that I relish more every time I try it.

Thanks to Master of Malt for the tastes, and for providing such a unique and well-needed service. While restrictions on shipping alcohol to and within certain countries may make it impractical for some, it’s still worth looking into for those looking to expand their whisky horizons and trying a few new things for less than the cost of a single bottle at their local liquor store.

This entry was posted in spirits, whisky. Bookmark the permalink.

4 Responses to A Week of Whisky: Master of Malt – Drinks by the Dram