My biggest weakness as a blogger has always been my habit of writing so-called “blessays” – i.e. long posts that take a lot more time to write than I usually have to spare. The result has been a blog that is often neglected for days or weeks at a time, while the backlog of things I want to write about – and beers that I intend to review – keeps getting bigger and bigger.

In an attempt to avoid this trap in the future, this post inaugurates a new and hopefully regular series called “Quick Quaff,” where I’ll be posting fairly short tasting notes on beer (and occasionally spirits) that I’m drinking. And somewhat fittingly, I’m starting with a beer that I meant to review when it was sent to me a few months back, but didn’t get around to due to the various personal matters that had me out of commission for a while… 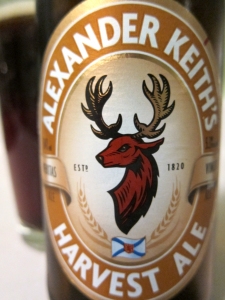 Released last October in limited quantities, Alexander Keith’s Harvest Ale is the first in a new “Brewmaster’s Series” of smaller batch beers that seem aimed at giving the Keith’s brand a bit more of a craft beer cachet. (The second brew in the series, Tartan Ale, was just released recently, with reviews popping up here, there and everywhere – I’m guessing the lack of a sample being offered to me can likely be chalked up to my delay in writing about the Harvest Ale, which is perfectly understandable, as if I were Labatt‘s PR company, I’d probably hesitate in sending more beer to a deadbeat blogger like myself…)

My initial impressions of this beer are good – it pours a really gorgeous mahogany colour with a thin tan cap, and the aroma is appealing, with notes of caramel and cherry candy (I almost wrote “cherry cough drops,” but it’s not quite so medicinal). The body could do with a bit more heft, but it’s still adequate to carry the flavour, which follows on the aroma with some caramel and dark cherry, joined by a faint nuttiness, a suggestion of cocoa, and a moderate bitterness in the finish that doesn’t quite balance the sweetness, but comes pretty close.

In the end, it’s undeniably a fairly mainstream product, with the aromas and flavours being more restrained than they might be in a similar beer from a small craft brewery. But for a brewery the size of Keith’s/Labatt, it was an admirable and generally successful experiment, and one that has me really curious to try the Tartan Ale.

This entry was posted in beer reviews and tagged ale. Bookmark the permalink.